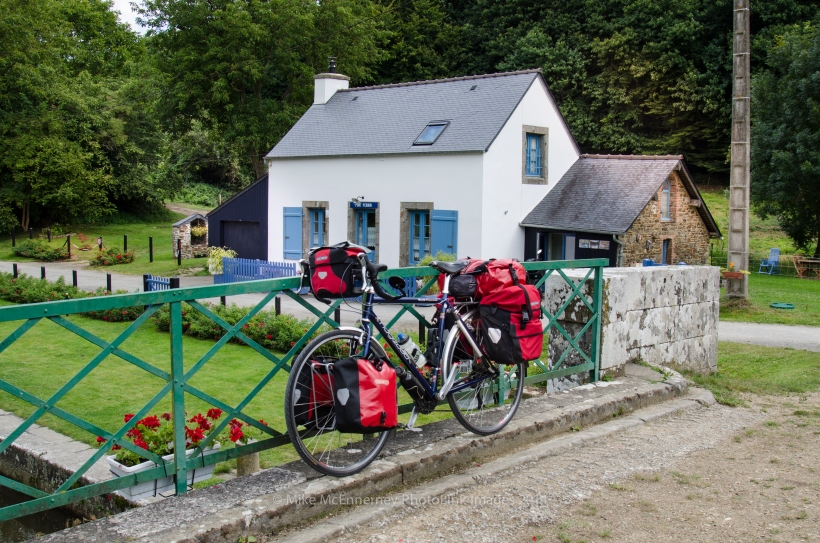 The next section of the trip was pretty flat because we were cycling along the canal d’Ille-et-Rance, which was nice and quiet.  It was just long enough before it could start to get too ‘samey’ and boring!

When we got to  Tinteniac, we missed the sign for the campsite that we were looking for, and as we seemed to be heading out of the town, we realised we must have been following the wrong campsite sign!

A little later, having finally found the local municipal campsite, we spoke to a couple of French cycle tourers and were told that you find your own pitch and the manager will come and collect your camp fees (which were cheap) later. Well, when given a choice of pitch, it is almost impossible to make a decision! We spent  the next fifteen minutes comparing pitches: is it flat, does it slope the wrong way, is it too much in the shade, will the sun be on the tent first thing in the morning to help dry any condensation, will we have noisy neighbours? HELP!!

Tent eventually up, camp chairs out, sat in the sun with a welcome cup of tea, starting to feel relaxed, then came a loud crashing sound of breaking glass. ‘What the hell was that?!!’ When I went to investigate around the other side of the hedge, I realised we were camping next to the recycling and rubbish bins! And the smell also permeated the air later. Great choice!

I've had a passion for photography for as long as I can remember and have been running my own photographic business for many years. This also carries over into my personal interests: I love the great outdoors and enjoy nothing better than to be outside taking photos and combining this with my hobbies of cycle touring, camping, backpacking, canoeing and just being out in the wilds, or as the Australians say "beyond the black stump" farther into the outback than the city lights.

To view or buy any of my stock images, click on the link below:

Photography and Adventures by bike and board

Bike with Diabetes - A Cycling Journey from Brussels to Cape Town

Two bikes and a tent

Adventure, curiousity and a lot of pedal power - exploring the world in the slow lane

bothies on a bike

a bike for all seasons

Blog on cycling around the coast of Britain

Blog has now moved to: www.gillandtony.co.uk

Words and pictures on cycling, kayaking and a bunch of other stuff

...A Life Simplified Is A Life Fully Lived

The ultimate guide for independent travellers seeking inspiration, advice and adventures beyond their wildest dreams

Tales of microadventures, sounds, photography, and other creative projects

The how's and whys of my cycling life