The next morning we packed up and cycled a staggering 12 miles (phew!) to our next destination, Paimpont. This may seem a lot of effort just to move on 12 miles but we had no food, there were no shops nearby and we had intended to visit Paimpont anyway. The one downside to taking the quiet back roads of France is that it is a rare event to come across a store selling a variety of foodstuffs, particularly fresh fruit and veg. Although fresh croissants and crusty baguettes are tasty, they give you little in the way of oomph for cycling! So when we arrived in Paimpont and spotted the local Spar, we were like a couple of excited children in a sweet shop!!

On returning to the municipal campsite, laden with goodies, we were somewhat horrified to discover that we must have pitched on an ants nest, as the inside of the tent was alive with the little blighters! We hurriedly emptied the tent and moved it further across our rather large pitch, much to the interest of the French family camped nearby. Fortunately, our ant problem was solved and we had a quiet night. However, the next morning the rest of the campsite was bathed in glorious sunshine while we were in the gloom of the only shady spot on the site! This most definitely would not do – having spent two whole days tent bound due to the torrential rain at the start of our trip, we wanted to enjoy some sunshine. Yes, you’ve guessed, we decided to move the tent again! Mid-move, we realised we were becoming the camp entertainment, with our fellow French campers wondering why we were creeping closer and closer to them!

For anyone interested in Arthurian legends, the town of Paimpont and the surrounding ancient woodland, the Forest of Broceliande, is steeped in folklore and is a place of magic and mystery. In the thick forest surrounding the town is Merlin’s Tomb, the Valley of No Return, the Golden Tree, the Fountain of Youth (which we were tempted to visit!) and all things to do with wicked fairies, pixies and elves. Needless to say, the town abounds with shops selling all the paraphernalia related to the above! There is, however, an attractive historic abbey and large lake in the town centre and an interesting ancient ironworks a couple of miles out of town.

The last of couple of days had been very hot and sunny – mustn’t grumble, but it did get to 29 degrees C! We were warned that a storm was on its way the following day, the day we were moving on, so we decided to get an early start before the weather turned. Amazingly, we were packed and on the road by 8.30 – we were beginning to master the art of packing the panniers!

We were heading for Malestroit, on the Nantes-Brest Canal. The cycling was wonderful – apart from the monstrous hill out of Paimpont, which one of our cycling buddies would have thought a wonderful start to the day…he who loves hills!! We passed through some lovely scenery – woodland, lots of countryside views (i.e. hills again!), pretty wildflowers – and very quiet roads. On entering a little place called Caro, we spotted a Bar Tabac and decided to reward ourselves with a coffee after the climb into the village. It wasn’t the most salubrious of places, looking as if it hadn’t been decorated since World War II, with the Patron gazing dolefully out of the window, but, hey, so what, the coffee tasted good! Somewhat refreshed, we continued through the village only to be confronted, round the very first corner, by a swish-looking, brand new, bright and cheery…yes, you’ve guessed it…modern cafe! Why does that always happen?!!

We continued on our way, with more great cycling, and arrived in Malestroit early afternoon (to be continued…) 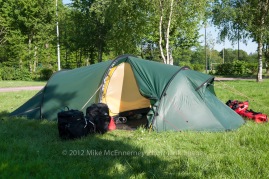 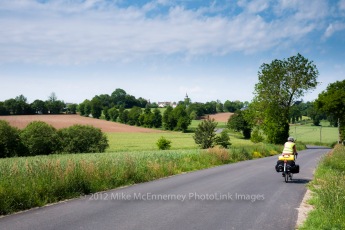 I've had a passion for photography for as long as I can remember and have been running my own photographic business for many years. This also carries over into my personal interests: I love the great outdoors and enjoy nothing better than to be outside taking photos and combining this with my hobbies of cycle touring, camping, backpacking, canoeing and just being out in the wilds, or as the Australians say "beyond the black stump" farther into the outback than the city lights.

3 thoughts on “Brittany by Bike”

To view or buy any of my stock images, click on the link below:

Photography and Adventures by bike and board

Bike with Diabetes - A Cycling Journey from Brussels to Cape Town

Two bikes and a tent

Adventure, curiousity and a lot of pedal power - exploring the world in the slow lane

bothies on a bike

a bike for all seasons

Blog on cycling around the coast of Britain

Blog has now moved to: www.gillandtony.co.uk

Words and pictures on cycling, kayaking and a bunch of other stuff

...A Life Simplified Is A Life Fully Lived

The ultimate guide for independent travellers seeking inspiration, advice and adventures beyond their wildest dreams

Tales of microadventures, sounds, photography, and other creative projects

The how's and whys of my cycling life